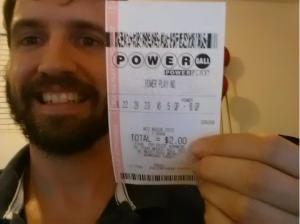 Looks like I won’t be going to work EVER!!!! Share this photo and I will give a random person 1 million dollars!

Nolan Daniels, pictured above, posted this photo and caption to Facebook last Thursday and earned himself the designation of most shared Facebook photo ever. While Daniels lottery win was later revealed to be a hoax, 2 million people shared the photo in the hopes of cashing in on his offer.

A little primer on the law of contracts: a contract is an agreement based on valuable consideration. Consideration is a promise to do something, such as pay a sum of money, or refrain from doing something, like not breaking the terms of an  agreement.

Contracts come in two flavors: bilateral and unilateral. Bilateral contracts are those which exchange a promise for a promise. Unilateral contracts are those where one party exchanges her promise for another’s performance. The lost dog poster is a classic unilateral contract. Pete puts up a poster that promises a reward for the return of his dog. Dave, with a keen eye for returning lost dogs and collecting rewards, does not need to go to Pete to accept the offer; rather he merely needs to return the dog in order to collect the reward. Pete’s promise to pay a reward for Dave’s performance of returning the lost dog.

Daniels’ Facebook photo posting operates as a unilateral contract: he promised to give away $1 million to one person, selected at random, who shares the picture of the winning ticket with his grinning mug beside it. Though Daniels revealed his offer to be a joke, under the common law he has likely made an enforceable agreement so long as a reasonable person believed that he made the offer in earnest. Whether Daniels made the offer in earnest is really a factual matter for a jury to consider. And you could only get to a jury if you had the chutzpah to bring a lawsuit to enforce that unilateral contract. And recently someone did something just like it!

Hip hop/R&B artist Ryan Leslie lost his laptop while on tour in Germany. He then posted a YouTube video offering $20,000 for the return of his laptop. He noted that the laptop contained music and videos that he wanted back. He later posted another video with a message that read: “In the interest of retrieving invaluable intellectual property contained on his laptop and hard drive, Mr. Leslie has increased the reward offer from $20,000 USD to $1,000,000 USD.” He also tweeted the same info directly, saying: “I raised the reward for my intellectual property to $1mm.”

Long story short, a man named Armin Augstein found the laptop, returned it to Leslie, and sought the reward. Leslie, unable to recover the media from his damaged computer, refused to turn over the promised reward. Augstein took Leslie to court for the reward where Leslie argued that his offer of a reward was not a unilateral contract but an advertisement: an invitation to negotiate. With that the judge opined:

A reasonable person viewing the video would understand that Leslie was seeking the return of his property and that by returning it, the bargain would be concluded.

After deliberating for a short while, the jury found for the good Samaritan,  leaving Augstein with $1 million and Leslie with a broken hard drive. It’s just a matter of time before Daniels gets hauled into court and, with the right jury, joins Leslie as another victim of unilateral contracts with teeth.