For the last three weeks, the Stewart family in Greenwood County, South Carolina have been caring for a harmless rough earth snake with two heads. An interesting find indeed. But this snake is unlike more common conjoined snakes in that the two heads bookend the body, rather than diverging from the same neck. Each head has two eyes and a fast moving tongue.

The children’s mother, Tina Stewart, told reporters, “One head’s is bigger and more dominant than the other, but they both seem to control the body.”

She added, ‘The main head will do one thing and then the other part’s trying to go in the opposite direction.”

The reporter contrasted this find with the yellow-lipped sea krait, see below, a snake whose tail resembles its head both in look and behavior. 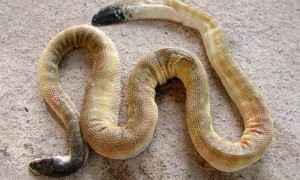 Whether circus officials will ask the snakes to enter one contract or two is still up for debate.