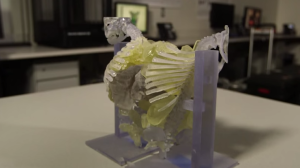 The Matas’ model included the twins’ heart, lungs, stomach and kidneys. The detachable, transparent liver is so realistic you can see the blood vessels inside.

Not long ago, Slate ran a wonderful article on 8 awful uses of humor in Courts of Law. However, the failed to include one bot mot from Justice Scalia, reportedly the funniest sitting justice. Here now, a summary of their punchlines:

OK, you’re good for the jury.

It’s an old joke, but when a man argues against two beautiful ladies like this, they are going to have the last word.

MR. CALLAHAN: Have you ever heard of The Twilight Zone?

MR. CALLAHAN: Goes kind of like this, do do, do do. . . . You’re traveling through another dimension, a dimension not only of sight and sound, but of mind, a journey into a wondrous land, whose boundaries are that of imagination; that’s a sign post up ahead, your next stop, The Twilight Zone.  “Do do, do do. Do do, do do.” (sung aloud and repeatedly)

Attorney Thomas Campagne’s oral argument leading to a losing 5-4 loss in front of the Supreme Court and a lawsuit for malpractice which included such gems as:

Urging Justice Antonin Scalia not to buy green plums because “you don’t want to give your wife diarrhea.”

Announcing that, “We’re not going to advertise to people and change our message that we want you to eat worms.”

Using the bathroom during a courtroom break, one defendant noticed a juror at the urinal and jokingly announced, “Vote for me!” The juror reported the joke to the judge, leading to additional criminal charges, and an eventual conviction for attempting to influence a juror.

In one California death penalty case, the judge joked that any jurors caught discussing the case inappropriately would be shot. The defendant claimed on appeal that this joke diminished the seriousness of the death penalty in the juror’s minds.

DEFENSE ATTORNEY: …if I were now to harm, shoot someone, Mr. Strople here, if I shot him right now—

COURT: Mr. Strople is a public defender, for the record.

On appeal, the death row inmate claimed that this joke revealed the judge was biased against defense attorneys (because it is “justified” to shoot them). The appellate court agreed that the jokes were “unfortunate,” but rejected a new trial, calling the jokes “relatively brief and mild,” and noting that the defense attorneys themselves participated.

“What’s the big rush to get back to Pennsylvania? It’s an ugly state.”

When a landlord testified that her tenant’s child had called her a bitch, the judge retorted, “I’m sure that wasn’t the first time someone called you a bitch.”

Responding to a mother with a crying baby, he declared: “If she only knew how much I hate kids, she would not have brought that kid in here today.”

Lamdin then mused to his courtroom that “we [already] confiscate cell phones and we put the cell phones in plastic bags and send them down to Annapolis. I suggested maybe we ought to do the same with children except poke holes in the bag. . . . We ordered some plastic bags about five feet tall but they haven’t been – they haven’t come in yet.”

When a man with the last name Crook pled guilty to driving without a license and possessing drug paraphernalia, the judge demanded, “Why did you drive so poorly? Smoke a little weed before you got behind the wheel?  . . . Smoke a little crack before you got behind the wheel?  . . . Well, you’ve got the appropriate last name…  All right crack head, Crook.”

In a court hearing on prostitution, Lamdin performed an imitation of ghetto-talk. (The transcript reads much like when The Office’s Michael Scott got in trouble for reenacting a racially-charged Chris Rock routine.) “Who put up your bond money for you, your pimp? . . . If I were to release you, you’d be scratching that itch tonight. . . . Ma’am, you can’t bullshit a bullshitter.”

Smoke ’em while you got ’em.

The Taedonggang, named after Pyongyang’s river, is one of the city’s most notable nightlife stops, producing seven types of beer. Although these are named with typical Soviet flair — Beer Number 1, Beer Number 2, Beer Number 3 and so forth…

In Soviet Russia, Zhigulevskoye was virtually the only beer available, a much catchier name than Beer Number 1.

“In the bad recessions in the past, the graduates recovered in 10 to 15 years. But we’ve never had such a strong recession,”[Till von Wachter, an economics professor at Columbia University,] said.

Harvard has just posted every Law exam ever administered since 1870 on their website. It’s nice to know that nothing changes, including: alliterated actors’ names, convoluted fact patterns, and that students hate hate hate real property.

Justice Scalia again turns out to be the funniest justice, and he is again followed by Justice Breyer. Chief Justice John G. Roberts Jr., who joined the court in 2005, after the Wexler study was completed, was squarely in third place, Mr. Malphurs found. Justice Samuel A. Alito Jr., who came onboard in 2006, gave Justice Ginsburg stiff competition for the role of least funny justice who talks.

As a bonus, Mr. Malphurs’ illustrated a failed use at humor during the Roe v. Wade case. Advocate Jay Floyd began his opening argument with a failed joke that set the tone for his argument, Mr. Chief Justice and may it please the Court. Its an old joke, but when a man argues against two beautiful ladies like this, they are going to have the last word. Pausing for the justices laughter, and gaining only cold silence, Mr. Floyd struggled to gain momentum through the rest of his argument. A note to struggling comics: the Supreme Court is not a good place to try out new material. “Hey hey double K!”

From the NY Times.

Reasonable readers could agree that the headline, “U.S. Sends Warning to People Named in Cable Leaks,” would lead to the same conclusion expressed in this blog post heading. However, a closer reading reveals that the threat may be less severe that the U.S. government claims. A list of people that the NYTimes reports the U.S. government has cautioned about threats to safety as a result of Wikileaks’ cable releases:

Note: Administration officials said they were not aware of anyone who has been attacked or imprisoned as a direct result of information in the 2,700 cables.

Note (additionally): A Pentagon spokesman, Maj. Chris Perrine, said Thursday that the military was not aware of any confirmed case of harm to anyone as a result of being named in the Afghan war documents.

Separately, isn’t it only a matter of time before the Russians slip some polonium 210 into Assange’s soup?

Love the specs on Ginsberg.

Everyone knows that legal representation is costly. Julian Assange claims that he’s already spent $300k on attorneys and that’s just to avoid going back to Sweden. Now, book publisher Random House has offered a staggering $1.3 million book deal to Assange, which will keep the legal machine going for long into the future. From the Times:

Mr. Assange will reportedly be paid $800,000 by Random Houses Alfred A. Knopf division for the American rights and another $500,000 by Canongate for the British rights. He stands to make more money from subsequent translations and serializations.